Home » Fishing » Types of Fishing Reels – What’s The Best Reel?
We may receive compensation from the companies whose products we review if you click through our affiliate links. As an Amazon Associate we earn from qualifying purchases. 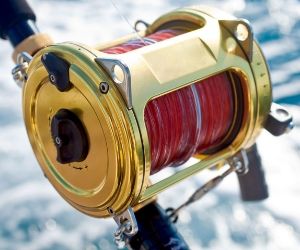 If you’re a fishing enthusiast, you’ve probably used a fishing reel at some point. Its working principle might not be obvious, but there’s a distinct difference between how each type of fishing reel operates. Before going all out to get one, it might help to know how they operate, the type of activities they’re used for as well as the impact of the component of the reel.

In this article, we outline the various types of fishing reel available as well as useful tips on how to choose the right one.

Types of Fishing Reels and What They’re Used For

The spincast reel is the most common option and represents an inexpensive option. It’s easy to use and requires no technical know-how which explains why it’s preferred by amateurs. 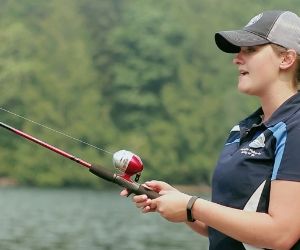 In terms of appearance, the spincast comes with a push-button that usually springs the machine into work whenever it’s touched. However, the most impressive area of this reel type is its accuracy as well as how easily it can be untangled.

That notwithstanding, it’s important not to mask the loopholes that come with using this type of reel. You won’t get enough feature, but you have little to complain about considering the amount they’re sold. One of the major disadvantages of the spincast is that they have a limited line capacity. In the sense that you can’t actually cover a lot of distance.

Secondly, there’s little comfort if you’re using a spincast to hold heavy game. It only holds small fishes making it a no-brainer for commercial fishermen. Generally, spincast is a more suitable option for beginners than professionals. When it comes to the bigger picture, you have to upgrade to a better reel for a bigger catch. Check out the best spincast reels.

The spinning reel isn’t just the most popular reel-type but one that has shaped everybody’s view of fishing reels. You would be absolutely correct if you say it’s a jack of all trade considering its varsity. 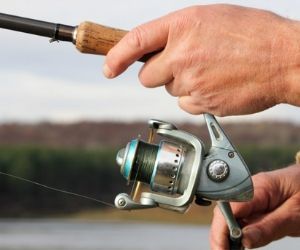 But there’s more reason why it’s every fisherman’s favorite tool. First, they’re used for carrying both heavy and light lines, it allows you to cover a specific distance, and there are no limitations to how they can be used.

The most impressive thing about spinning reel is the way they’re cast. Most times, the reels are located underneath the fishing tool and have a ball attached. To use the tool, you have to flip the ball open to target the most suitable angle and shut it down after you find the right spot to cast your line.

There’s no type of fish size you can’t catch with a spinning reel. This includes small to medium-sized as well as large games like tuna and salmon. They’re more suitable for fishermen who like to go fishing in large water bodies but still maintains a simplicity that makes it appealing to even novice.

Despite all the cool features it possesses, the spinning reel is far from perfection. There’s still a slight limitation in the size of games you can catch. Super-large fishes are impossible to tame, and it’s never a good option for a line above 10-pounds. This also means you will have a few hitches using in heavy cover areas.

Spinning reels and baitcasting share a similar style. They’re often used in the same scenario giving professional fishers a tough decision to make. However, while spinning reels have their spools located beneath the reel, Bait-casting has there’s in the middle. 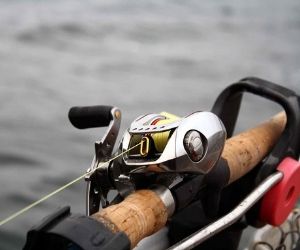 What this gives is better control and added accuracy.

Another advantage baitcasting has is that it gives more flexibility. Allowing anglers to change direction and retrieve effortlessly. However, baitcasting needs some practice to master all the techniques of using effectively. It’s impossible to jump right into using baitcasting without any prior knowledge of using reels. It isn’t designed for amateurs and certainly isn’t the cheapest option out there either.

Besides, baitcasting has an excellent option for casting over a long distance. The user often has control over how far or near the line goes, and you can quickly switch your direction to that of the game. They’re also great for those who love to fish in heavy cover areas and are the best reeling choice for medium-sized and large games.

You will also discover that it gives more control over hard fighting fishes thanks to the gear design. What you won’t like about this reel is its constant tangling and complicated design that makes it hard for just anyone to use. Check out the best baitcasting reels.

Flying reels like the name suggests are often used in moving water. That’s because they work with the current. Flying reels were originally designed for fishing in streams, but nowadays you will find them in use in several water bodies. This includes saltwater, freshwater as well as creeks. 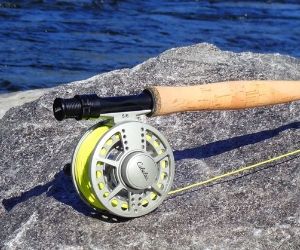 There are different types of flying reel, each with a different retrieval ratio that initiates a varying degree of application. For instance, the single-action flying reel which has a retrieval ratio of 1: 1 is a bad option for those trying to fish in areas with large running fish while the multiplying flying reel will work in such areas. The only difference though is that the latter costs more.

Automatic flying reels seems like the complete package. It has an automatic retrieval system that allows multiple casting at a time, but they tend to limit the user’s efficiency.

The major advantage flying reel comes with is the ability to cast your line over several distances thanks to the weight of the fly. Also, the backlash is minimized, thereby reducing tangling and allows you to catch a game unawares.

There are also a few drawbacks to using flying reels. One of them is that you will need a large working space due to the width of the cast. You will also have to spend some time learning how to use the cast effectively whereas, in spin-cast, you can learn all about casting in a day. Check out our fly reels guide.

These are often used in deep water bodies and represents a time-savvy option. It has a retrieval ratio and allows you to effortlessly recast if you feel your potential zone has no game. 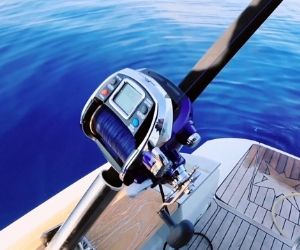 Most often, electric reels are used for catching medium-sized fishes like tuna, grouper, and swordfish. The speed and power of the reel depend on the brand you go for.

However, one of the things you won’t like about this reel type is that they’re a bit pricey and might not come through in every scenario. Secondly, they often need a stand-alone power source to function, and you will have to invest in electrical devices not sensitive to moisture if you want to get the most out of this tool. Check out the best electric fishing reels.

The inline ice reel shares a lot of similarities with the flying reel except that it doesn’t work in all scenarios. Just as the name suggests, inline ice is designed for fishers in ice zones and eliminates the restrictions that come with using flying reels. 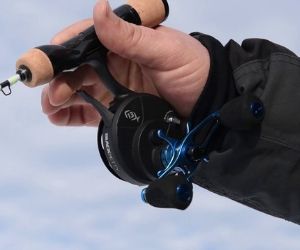 Inline ice reels have fewer twists and are used for luring suspicious games that flee at the sound of a splash. Besides, this reel has a button that notifies you when a line is being taken out or hooked by a fish.

However, their retrieval rate is less impressive, and there’s a huge possibility of losing big catch due to the limitations of the gear system. Check out the best inline ice reels.

Both baitcasting or spinning reels can be used for surf fishing. However, it’s better to go for a specialized tool to get the right angle when surfing. Surf reels have a nice retrieval ratio that makes it better suited for surf fishing. 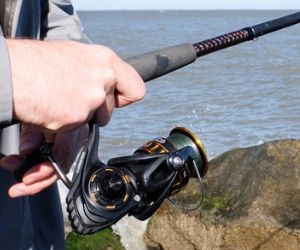 Most surf reels are designed to withstand water bodies with harsh weather conditions among which include saltwater, sun as well as sand.

The majority of good surfing reels are made of graphite as well as stainless steel for corrosion resistance. However, like baitcasting, they’re complicated to handle and chases baits away if the angler isn’t technical enough. The unique thing about this reel type is that it can handle the speed of most big games. Check out the surf reels.

There are different types of fish reels but choosing the right one ensures you land the right game with little effort. When shopping for a fish reel, you should take the distance of the line, retrieval ratio, and the scenario into consideration. For instance, if you fish in water bodies with large hard fighting fish, going with a Spin-cast is as good as going with nothing.

Hence, the right type of fish reel is determined by putting your needs into consideration rather than what works for the other person. Also, you should know that you can only determine the right type of fish reel for you only after experimenting. No matter the one you go for, ensure the reel is comfortable and offers you maximum flexibility as well.